My nightly routine consists of washing my face, brushing my teeth, and reading my book. I’m sure that as you read this, you’re thinking about what your own bedtime routine is like. Perhaps you simply brush your teeth and hop into bed, or maybe your bedtime is more of an elaborate ritual, like my Granddad’s was. He used to spend at least an hour in the evening washing his face, combing his hair and shaving, all while singing very loudly with his radio on full blast.

When a person is living with dementia, bedtime is often a very different story. They may not have the ability to fulfill their nightly bedtime routine in the way they once did. They may also have trouble sleeping, which can exacerbate the other physical and cognitive changes they’re dealing with. These individuals may experience reversal of day-night sleep patterns, which results in sleeping more during the day and not getting enough sleep at night. Other sleep disturbances could include frequent nighttime awakenings, and decreases in REM sleep, which can negatively affect one’s memory and mood. These sleep disturbances can lead to changes in behavior and appetite, and can aggravate the other symptoms of dementia. This creates added stress for both care partners, as it’s likely that neither person is getting adequate sleep.

During my 4th year studying Gerontology at St. Thomas University, I decided to research sleep disturbances among persons living with dementia, as it’s an important health issue that has somehow been overlooked. Current solutions are few and far between. One frequent suggestion is to increase exercise, while other studies recommend reducing caffeine intake, practicing light therapy, and using certain types of medications. Medications can of course be helpful for some, but they’re not the solution for everyone. Some medications have the potential to cause dizziness, and because dementia can affect gait, the combination makes walking even more difficult and increases the risk of falling. Some doctors won’t prescribe sleep medications to older adults, as they can interfere with other prescribed medications.

During my research into all these different factors affecting sleep hygiene in individuals living with dementia, one study in particular piqued my interest. Researchers measured the benefits of social interaction and how it might help people living with dementia achieve better sleep. The researchers found that if someone engaged in social activity throughout the day, of any kind at all, their sleep quality substantially improved. Having had some experience in recreational therapy during my summer student positions at York Care Centre, this angle really intrigued me, and I wanted to explore it further.

With this information I explored further, and eventually developed a care package called The Sleep Kit. The Sleep Kit is a small box of alternative sleep therapies for individuals who are living with dementia. Each item in the kit was chosen based on its ability to stimulate one of the five senses, and all are focused on promoting one-on-one social interaction before bedtime. These items include a deck of playing cards, lotion, and essential oil, as well as other objects and products that help both the caregiver (whether formal or informal) and the individual living with dementia prepare together for a good night's rest. No part of The Sleep Kit is mandatory, and each activity can be easily modified to cultivate a positive experience that easily fits into any stage of the dementia journey. The Sleep Kit also contains a custom-made sleep diary that outlines each item, suggesting how it can be used and why it’s important. 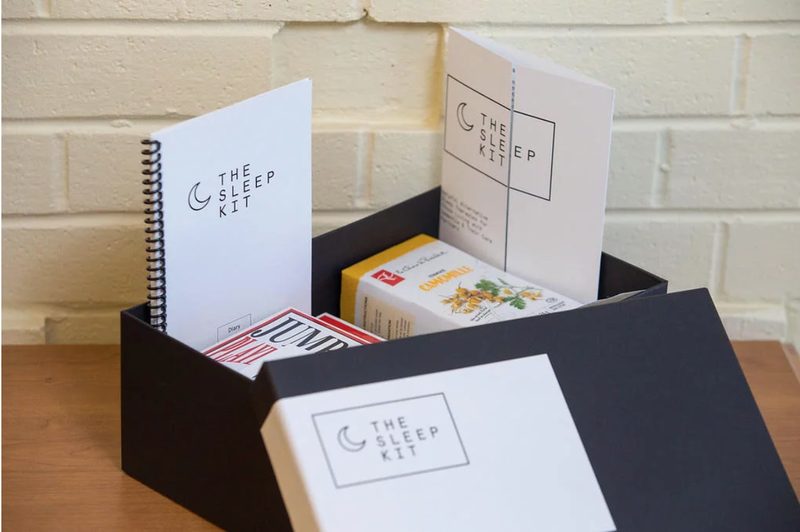 I currently work as an Activity Coordinator at York Care Centre in Birch Grove, where 24 people with some form of dementia call home. When I started, I mostly worked evening shifts, and I’d often see people experience the effects of “sundowning”, an increase in agitation beginning late afternoon and extending into the evening. In many instances, even just sitting down and spending some time with that person was helpful. Sometimes I’d bring them into a quiet room, where I would play music and organize an aromatherapy session with them. The success of these small gestures showed me how extremely powerful human interaction can be. Caregivers are extremely busy, and sometimes it can be difficult to find the time to spend quality time together. However, taking the time is always, always worth it.

During my work at York Care Centre, I read a call for applications for a research grant awarded for projects centered on caregiver support. I applied, and was soon elated to discover that I’d received a $50,000 award from the Centre for Aging and Brain Health Innovation to test and validate The Sleep Kit. This award was then matched by the New Brunswick Health Research Foundation. I developed a research plan with the help of my co-researcher and friend, Claire Hargrove, as well as my former professor, Dr. Janet Durkee-Lloyd, who I consider my mentor— she encouraged The Sleep Kit idea from the beginning.

We’re now seeking 26 participants from Fredericton community to be involved in this research study during the summer months. In the fall, we’ll be doing another study with 24 participants who are living in the nursing home.

Participants will be divided into two groups. group one will wear a Fitbit Alta HR (which tracks your sleep based on heart rate) for 30 days. Group two will also wear the Fitbit for 30 days, but they’ll also be asked to administer activities from The Sleep Kit as an intervention. The results of the study will then be analyzed and compiled into a final report for CABHI and NBHRF.

The Sleep Kit is an easily accessible tool kit that I hope can be helpful in improving quality of life for both care partners in any given situation. If anyone is interested in being involved, we are seeking participants who are living at home with someone who is affected by dementia. For more information, please contact: eve@thesleepkit.org or claire@thesleepkit.org.

Eve Baird is a graduate from St. Thomas University where she studied Gerontology, English Literature and Psychology. Eve was born in Callander, a very small town in Scotland, and she immigrated to Fredericton, Canada with her family when she was 11 years old. She took an introductory Gerontology course and became devoted to the study of aging after interviewing the first Canadian female war artist, Molly Bobak. Eve began volunteering at York Care Centre in her 3rd year at St. Thomas University, and did a narrative life story with a resident there for over a year, which earned her the Volunteer of the Year award from Life Bio. Eve has worked in a number of different long-term care facilities. She began working as a summer student in recreation during her undergrad, and after graduation began working in Birch Grove, a memory care home in York Care Centre. Eve began The Sleep Kit project in February of 2018, and hopes to make a difference in the lives of those living with dementia and their caregivers.